Review: The Voyage of Charles Darwin 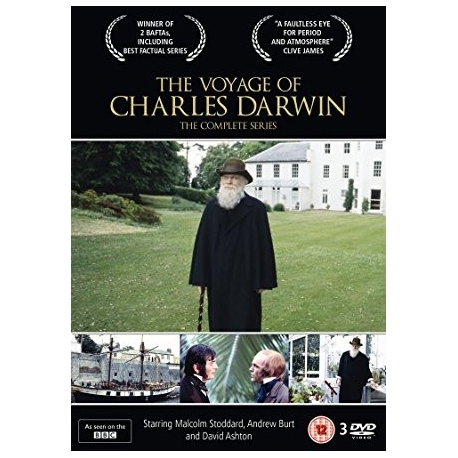 When it comes to furthering our understanding of the world around us, the scientific revolution has given us a stellar list of heroes: Galileo, Newton, Einstein amongst many, many others. The subject of the BBC’s 1978 seven-part drama was another great hero of science: Charles Darwin, and specifically, his five-year voyage around South America on board the HMS Beagle from 1831 – 1836.

Darwin was an amateur naturalist with a keenly inquiring mind. During his voyage around South America he noticed how the fauna on islands off the coast of South America would often resemble but not be exactly the same as the fauna on the mainland. Why would this be and what could account for the differences? The Captain of the Beagle was Robert Fitzroy – a devout Christian – and he was sure of the answer: it was because God had willed it that way. This, unsurprisingly, did not satisfy Darwin who looked for more specific reasons.

Darwin gathered specimens from South America and sent them back to England for more detailed examination. He gathered data from his own observations and that from his correspondents all over the world: Darwin was a prodigious letter-writer and eagerly kept abreast of the latest findings. By 1844, Darwin had enough data to compile an initial draft of his theory of evolution by natural selection. He instructed his wife, Emma, that if anything were to happen to him that she was to use £400 of his money to publish this work.

Still, Darwin did not publish his work for another fifteen years in 1859. Why was this so? Historians say it is because Darwin was well aware of the great unease his theory would cause amongst religious believers. Anyway, Darwin’s hand was forced when, in 1858, another amateur naturalist and a correspondent of Darwin, Alfred Russel Wallace, sent to Darwin his own theory of how species had come into being – a theory that was identical to that of Darwin’s own.

In the years since 1859, despite the abuse and misinformation directed towards him and his theory, Darwin has been thoroughly vindicated by science. And religious scholars (well, all except the most blinkered) have had to adapt their worldview to incorporate Darwin’s theory.

To this day, however, there is a great deal of confusion about evolution and its status. “It’s only a theory” is a common refrain amongst the opponents of Darwin. In my experience, this is usually amongst those who have not read books about evolution by mainstream scientists and they miss the point about Darwin’s great contribution. Evolution is a fact – there is simply no question that life has continuously evolved on earth over a fantastically long period of time. Go back far enough in the fossil record and the most advanced life-forms on earth will not be mammals or reptiles: they will be fish. Darwin’s singular and lasting contribution was to identify a mechanism by which this change had occurred: natural selection.

There are many reasons why Darwin is regarded as a hero amongst scientists, but let me take one of my own favourite examples. Back in 1862 a British orchid grower sent Darwin some orchids from Madagascar including:

the beautiful and star-shaped flower of Angraecum sesquipedale. This has an exceptionally long nectary (getting on for 30 cm) and in a book on orchid pollination, Darwin suggested that this extreme feature may have evolved alongside a moth with an exceptionally long tongue to pollinate it.

Darwin had used his understanding of evolution and how species co-evolve to predict that there must be a creature with a proboscis long enough to pollinate that flower – even if such a creature was not known at the time.

In 1907, more than 20 years after Darwin’s death, a subspecies of the gigantic Congo moth from Madagascar was identified and named as X. morganii praedicta apparently fulfilling Darwin’s prediction (the name indicating that it was predicted, though actually in the paper naming the moth Darwin wasn’t mentioned). The moth is large at around 16cm in wingspan, but the proboscis is truly colossal and can be more than 20cm in length forming a huge coil in front of the head when not in use. However, while there was now an orchid with a long nectary and a moth with a huge tongue, the question remained: did X. morganii praedicta really feed on A. sesquipedale?

It wasn’t until 1992, nearly a century later, that observations were made of the moth feeding on the flower and transferring pollen from plant to plant with both videos and stills being taken. This was observed in the wild and confirmed further with studies in captivity. Thus more than 130 years after Darwin first suggested that a large moth pollinated an African orchid, his hypothesis was confirmed. It took quite some time, but quite clearly Darwin’s prediction, based on extremely limited evidence but bolstered by his understanding of his own new theory of natural selection, was correct.

Was Darwin a believer in God? Historians are divided on this issue. While Darwin himself makes clear that when he first climbed aboard the Beagle, he held orthodox Christian views, there is no question that over time Darwin became less and less convinced by some of the main tenets of Christianity and indeed was appalled by some of them.

…disbelief crept over me at a very slow rate, but was at last complete. The rate was so slow that I felt no distress, and have never since doubted even for a single second that my conclusion was correct. I can indeed hardly see how anyone ought to wish Christianity to be true; for if so the plain language of the text seems to show that the men who do not believe, and this would include my Father, Brother and almost all of my friends, will be everlastingly punished. And this is a damnable doctrine.

Darwin could not bring himself to believe that a merciful God would condemn to everlasting torment those who did not believe in Him. When pressed, he would say that he preferred to regard himself as an agnostic on the question of whether there is a Creator.

The BBC’s The Voyage of Charles Darwin is utterly compelling viewing. It is gripping to watch Darwin as he begins to question long-held assumptions and begins to feel his way towards a more convincing theory about the origin of species or the “mystery of mysteries” as he also termed it. The series was filmed on location in South America and this adds immeasurably to the power of the drama as we witness the genesis of Darwin’s insights at the very same locations that he visited almost two centuries ago.  This is must-see television at its very best.

This entry was posted in Science & Evolution and tagged charles darwin, HMS Beagle, The Voyage of Charles Darwin. Bookmark the permalink.

1 Response to Review: The Voyage of Charles Darwin

This site uses Akismet to reduce spam. Learn how your comment data is processed.